In 2021, companies will continue to use LDAP services to authenticate users. Even when it is obvious that OpenId Connect and OAuth2 are the new de facto standard for user authentication, the change has to be well planned. Therefore, in some environments it makes sense to use migration procedures to accelerate the widespread introduction of cidaas with the help of this LDAP service. This article describes what the cidaas LDAP service does, how it can be used in companies and which security aspects have to be considered.

DAP services, for example Microsoft’s Active Directory Service, Oracle Internet Directory and OpenLDAP are based on storing information in a directory tree structure. Thus, organisational structures are mapped and the employees in these organisational units are organised. The administration of a password for the employee (user) is then only a small step to enable user authentication with an LDAP service. For this reason, LDAP services are often used in companies for user authentication. Some manufacturers have expanded the directory structures to such an extent that system elements such as computers or printers are also managed in these directory services.

Ever since “digitalization” has become the dominant theme, secure and future proof IAM solutions, such as cidaas, have been in demand. The cidaas LDAP-IDP service is designed to enable a compatible connection of LDAP clients in order to significantly accelerate migration projects. Cidaas supports the OpenId Connect, OAuth2 and Device Authorisation protocols. In addition, cidaas offers many verification methods for users that are passwordless and in combination enable multifactor authentication. 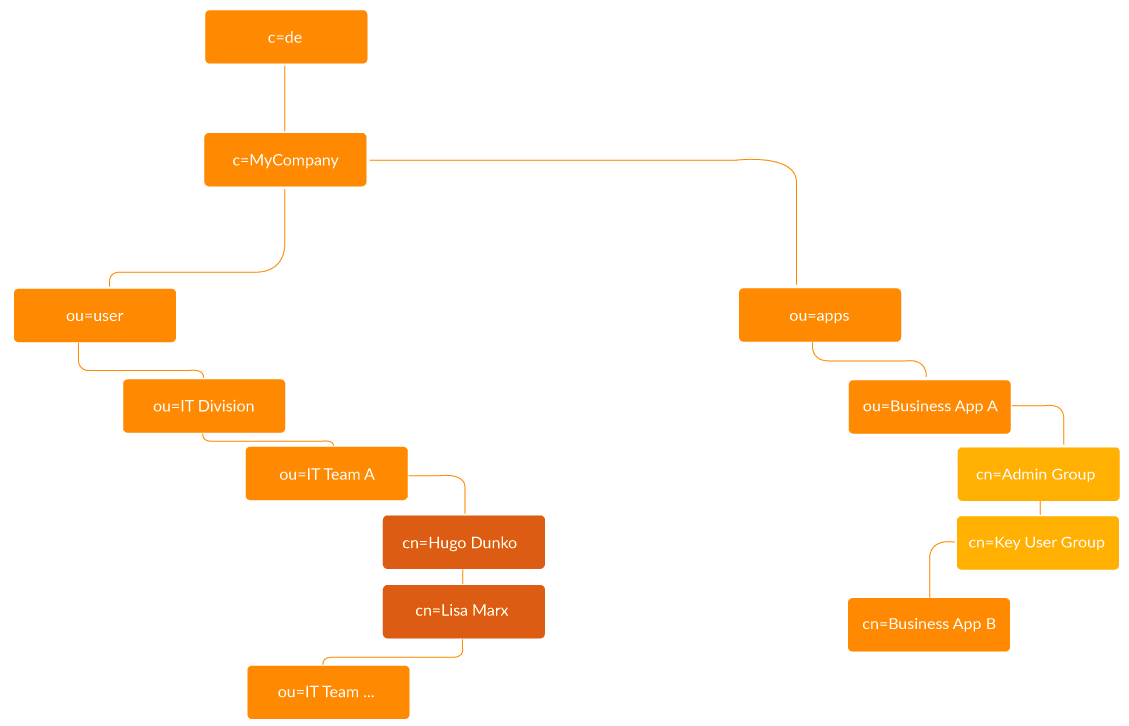 For users, a password can also be managed in the LDAP element and, depending on the implementation, a history of passwords used. These passwords are usually stored as hash values (e.g., SHA-1 or SHA-256). This makes it possible to authenticate users with the combination “user ID and password” in the LDAP server.

Distinctions between LDAP and cidaas

Security-relevant points of critique with LDAP

The use of an LDAP service in a secure, closed environment is generally less problematic as long as there is appropriate monitoring and regular auditing.

LDAP implements a directory tree, cidaas does not. This means that navigation within hierarchies is not possible in a meaningful way in cidaas. Instead of a tree structure, cidaas uses a group concept and user roles that can be used flatly and simply from an authorization perspective. This results in more powerful ways to filter users.
Cidaas implements only “group” and “user” objects.

The use of the cidaas LDAP Service is possible with the implementation of cidaas. It is useful if existing applications need LDAP for a defined period of time and will only use new authentication standards in the context of their lifecycle management.

The cidaas LDAP service is provided as a Docker image and operated on a server system in the company. The LDAP service should not be operated in the cloud, nor should it be publicly accessible.
cidaas can be used as SaaS, as intended, as the LDAP service is connected via secure, internet-enabled protocols.

Each LDAP client is configured in cidaas as a standalone app and assigned individual group and role permissions. This ensures that a client system does not gain access to user information that is not in their scope. The cidaas LDAP service can therefore be considered more secure than traditional LDAP services.

The cidaas LDAP service has a defined functionality that is limited to user authentication and authorisation only.

In the enterprise, the replacement of LDAP services should be considered for several reasons:

because other possible uses of LDAP, e.g., device management or domain administration, have long since been taken over by more powerful device management solutions.
The use of cidaas replaces LDAP-based authentication. However, the cidaas LDAP service is suitable as a quick win so that systems can continue to be used in compatibility mode.